New Web Page for CaveSim
We hope you enjoy the new site.  Our OLD website is still available at  http://cavesbydave.blogspot.com/
CaveSim participates in Cool Science Festival 2010
On September 18, 2010, CaveSim's excellent volunteers helped set up The Cave at the Colorado Springs Cool Science Festival at UCCS.  We had an amazing turnout - a record 218 people enjoyed The Cave over the course of seven hours, and it was all our volunteers could do to keep up with demand.  We presented new interactive educational materials focused on cave and bat science, cave safety and conservation, and other cave trivia.  Thanks to Cool Science for hosting the event!

We are happy to report successful application to the USPTO for a cave simulator patent -- the USPTO has accepted the filing, and The Cave is now patent pending.  If you are interested in purchasing a custom-built cave, contact Dave at jacksondmit@cavesim.com.  Thanks for your interest!

Cavers and emergency response personnel had an extra challenge in this year's Colorado Cave Rescue Network (CCRN) Seminar on April 10, 2010.  Three groups (about 40 people total) used careful planning and good communication to navigate the wired corridors of The Cave with their "patient" in a sked.  For more information on this and future CCRN seminars, visit http://www.coloradocaves.org/?p=308.

Thank you to everyone who tried The Cave at the CCRN training, and to the CCRN organizers, including Marty Reames.  We really appreciate all of the positive things that we heard from you, including the following:
Unidentified participant, talking about The Cave: "This is cool!"
Participant, caver, and geologist Jerry Elliott: "No, this is truly excellent." 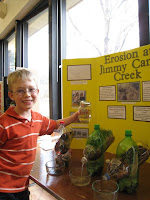 We had a great time taking The Cave to the Catamount Institute's Student Research Symposium at Colorado College in Colorado Springs, CO on April 21, 2010.  This was a free event, open to the public, from 9am-2pm.  Kids and adults enjoyed The Cave (an electronic cave that you can crawl through) and other hands-on nature and science exhibits, student projects, and workshops.  For more information on the Symposium go to http://www.ppsbn.org./  We had 113 kids crawl through The Cave, thanks to our great team of volunteers.  The kids crawled through in an average of 43 seconds, and damaged an average of 2.19 formations with 19 formations in The Cave (we'll be adding more formations soon to make The Cave more challenging).  In addition to crawling through The Cave, the kids learned about bats by playing the Bat Migration game, and about how to avoid hurting a cave or yourself while going caving.  Thanks to everyone who participated!